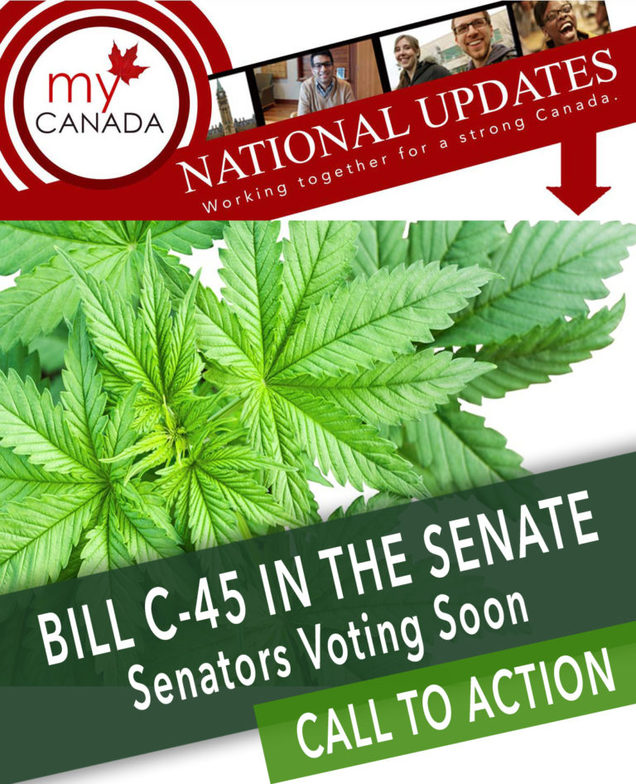 Bill C-45 - The Cannabis Act - is currently in second reading stage in the Senate. Despite a significant number of senators wanting to speak on it, initial debate will only continue until March 22nd and a final vote will be held by June 7th.
If Senators vote to amend the bill, it would then move back to the House of Commons for voting. If the bill is passed by the Senate, royal assent would follow immediately and legal marijuana would be available for purchase by August or September.

***
The Topic of Marijuana Featured on the Faytene Show:
Faytene Grasseschi recently explored the topic of legalized marijuana with the University of Toronto’s expert on pharmacology and toxicology, Dr. Harold Kalant.

Dr. Kalant helped give a better understanding of the implications and concerns regarding legalized marijuana on Canadians including:

▪ the effects on youth,
▪ changing DHA levels,
▪ medical marijuana, and
▪ recreational marijuana use.

**
What You Can Do:
The timing is critical to act to stop or slow the legalization of marijuana in Canada. Here is what you can do now:

Please pray that Senators will stand against the pressure to rush this bill through and will faithfully perform their task of giving sober second thought to the legalization of marijuana in general and this bill in particular.

Please pray that Canadians would reject the recreational use of drugs and that young people in particular would be protected from lifelong addiction and dependency of them.

Please contact the Senators from your province and ask them to amend Bill C-45 to better protect Canadians. A short phone call to register your opposition to legalization or a brief e-mail outlining your concerns is an effective action.

Some of the main concerns about Bill C-45 that you might want to focus on include:

▪ The bill's recommended minimum age of use of 18 years whereas experts have suggested the minimum age of 25.
▪ The purpose of the bill is supposedly to protect young people from Cannabis, but Bill C-45 includes a clause stating youth ages 12 to 18 will be able to posses up to five grams of marijuana before being criminally charged.
▪ Bill C-45 would allow up to 4 plants to be grown in each home.
▪ Police forces across Canada have indicated they will be unprepared for legalization by summer 2018.
▪ Legalized marijuana gives young Canadians the message that recreational drug use is permitted and acceptable.
3) Spread the Word:

Please help spread the word about this time-sensitive opportunity to get involved on bill C-45. Feel free to share this e-blast or the youtube videos above on your social media and with your networks.

Thank you for being a voice on this issue.