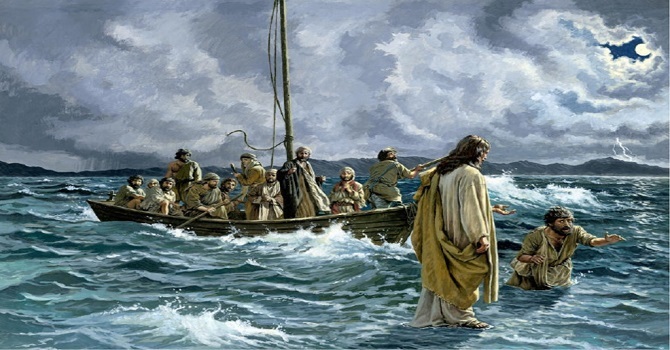 …40 Then he returned to his disciples and found them sleeping. “Couldn’t you men keep watch with me for one hour?” he asked Peter… “Matthew26:36-46 – read” …24 Suddenly a furious storm came up on the lake, so that the waves swept over the boat. But Jesus was sleeping. 25 The disciples went and woke him, saying, “Lord, save us! We’re going to drown!”…”Matthew 8:23-27 – read”   When the disciples where crossing the sea, Jesus was exhausted so He fell asleep in the boat. Jesus had no fear, and He knew that God had no intention of drowning His only Son. But the disciples had not after all they saw and heard were not sure about that though. So the disciples saw the storm and focused on the storm. Yes it is hard to focus on Jesus when you are in a storm but what you give attention to is what you empower in your life. So the fear of the disciples was empowering the storm to persist. They were trying to deal with the storm in their own power. But as soon as they turned to Jesus, even in fear, they had a response. Jesus got up and rebuked the storm. Do you need Jesus to deal with your storm? Can you trust Him or are you trying to deal with the storm yourself, in your own strength. Stop looking at the storm and focus on what Jesus is doing. He is not rattled by the storm, in fact He is quite at peace. You will only find your peace in Him, not in your storm. Crawl into the boat and lay down with Jesus and let the storm pass. From this advantage point you will see the storm for what it is. Jesus later in the book was in a storm. An intense storm, it was the end of His earthly life and He knew it and what was coming. He also came back in the storm and found His disciples sleeping. But this time they shouldn’t of been sleeping. They didn’t discern this storm this time was a discerning storm of life. Hey failed to recognize this storm was from God. See not all storms are bad. This one was a defining moment in their lives, Jesus and the world. If we don’t pray and look to Jesus we won’t know what storm we are in. One from the enemy or one from God. Is it one that will change your life for ever? Or is it a distraction of the enemy to derail you from God. We need to be sleeping through the storms of the enemy by not giving attention to what he is doing and be awake to the storms (trials, tribulations) the Lord allows to change us, to strengthen our faith, to have the fear of God in us. This fear is not the worlds or enemies but a healthy fear. We desperately need to pray and know the difference. We don’t discern because we don’t seek God about the situation but give into whatever comes our ways. Some of our storms could be stopped immediately if we can discern WHO’S storm it is. SO WHO ARE YOU PAYING ATTENTION TOO? Remember in God’s storm Peter got the walk on water, even if it was only for awhile. He got out of the boat when the rest stayed safe.